Posted on September 30, 2013 by stchrysostoms

Fr Ian compiled this Michaelmass quiz for local priests of the Society of Catholic Priests. Its a light hearted quiz on the theme of angels. Have a go… 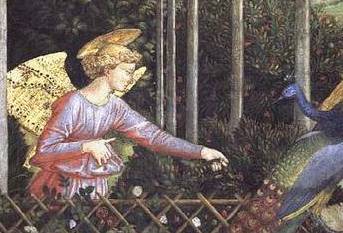 An Angel feeding a Peacock in paradise, detail from a 15th century painting, reproduced in the reredos of the Anson Chapel at St Chrysostom’s

2. Which American singer is ‘Jealous of the Angels?’

5. What are the two ingredients of Angels on Horseback?

6. Who lived in Honeysuckle Cottage, Ambridge and what was the name of his rather shady son who at one time ran an antiques business?

7. Who claimed an angel shut the mouths of lions?

8. Which famous TV zoologist said ‘I viewed my fellow man not as a fallen angel but as a risen ape?’

9. Which popular Christmas Carol, written by the scottish poet James Montgomery first appeared in print in the Sheffield newspaper the Iris in 1816? Today in the USA it is most commonly sung to the tune REGENT SQUARE while in England the tune IRIS is preferred.

10. Which Manchester United midfielder made it into Brazil’s international team in 2012, and who also in that year was part of a team which won a silver medal in the Olympics.

Answers will be posted in the ‘comments’ below in a few days time.

St Chrysostom’s is an Anglican (Church of England) parish church in Manchester, UK. We’re an inclusive, diverse and welcoming faith community rejoicing in our Anglo Catholic tradition, where people of many differing backgrounds make friends. Find our Facebook group at https://www.facebook.com/groups/2364267899/
View all posts by stchrysostoms →
This entry was posted in Uncategorized and tagged Angels, Captain Scarlet, Quiz. Bookmark the permalink.