WW1: Teaching our children to be peacemakers

We will be offering some thoughts and comments from members of St Chrysostom’s congregation about the World War One commemorations in the coming months. Thank you to Sandra Palmer for this one, to start us off. Sandra is a retired lecturer in Education.

I have long had mixed feelings about the wearing of the red poppy on Armistice Day.  On the one hand I want to honour those people who have lost their lives in war or who have suffered as a consequence of war;  on the other hand I do not want to ennoble anything about war. 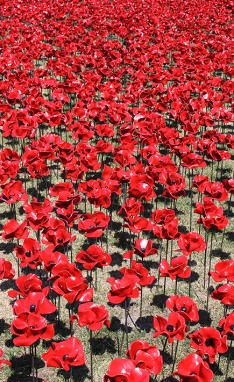 Ceramic Poppies at the Tower of London

Commemorating World War One is a particular problem for what are we commemorating?  It can be argued that World War Two was a necessary evil to stay the hand of the horrors of Nazism but there are no clear goodies and baddies in World War One. Germany is often presented as a marauding power hell bent on conquering Europe but Christopher Clark’s well received book Sleepwalkers paints a very different complex  picture.  I see the build up to war  as being like a game of cards between countries and alliances, with bluffs and double bluffs but  it all went terribly wrong – and on the whole it was the ordinary soldier who paid the price. Ironically it was said to be the war to end all wars. Instead it spawned many of the wars to come, include those that currently fill our screen.

Surely the best way to commemorate the First World War would be to teach our children to be peacemakers, winning their hearts and minds for peace through stories ,sayings and symbols appropriate for their age. Michael Morporgo’s War Horse, a book for Key Stage 2 children, powerfully tells of the impact of the first war on the lives of soldiers. Sadly there are many children in Manchester who have their own stories to tell as they are asylum seekers, the victims of war themselves.

P4C, Philosophy for children, is a good starting point as children are taught how to listen to one another and respect each other’s opinions when they discuss sayings about war and peace, some of which might come from the scriptures.  Conflict resolution exercises help children learn to learn how to use words not fists to resolve arguments.

School assemblies/ worship can reflect the sorrow and the pain of war in the prayers, and reflections. And at a very simple level they can look at how we can greet one another peacefully . Salaam Alaikum –Peace be unto you .

But above all we need to teach children to accept difference and to see the ‘other’ as their neighbour., loving him or her  as they love themselves.

St Chrysostom’s is an Anglican (Church of England) parish church in Manchester, UK. We’re an inclusive, diverse and welcoming faith community rejoicing in our Anglo Catholic tradition, where people of many differing backgrounds make friends. Find our Facebook group at https://www.facebook.com/groups/2364267899/
View all posts by stchrysostoms →
This entry was posted in Anglican, Anglo Catholic, Christianity, Faith, Manchester, Various Voices and tagged Peace, WW1. Bookmark the permalink.