Posted on February 25, 2015 by stchrysostoms

To mark the opening of new classrooms, and a new look, to St Chrysostom’s School we’re posting a few blog posts about the school in the past. We’ve looked at the origins of the school (see here). Now we interview a former pupil who works at the school – Janice Hamadani.

Janice was at the school in the 1960s when it was on its former site on Carmoor Road (now occupied by Victoria Hall), although as she said, Year 6 children had to cross Upper Brook Street to their classroom above a hardware shop, on a site where the hospital now stands. 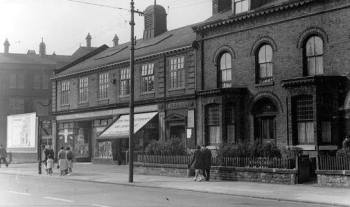 Janice attended the school from Nursery, and remembers sitting in circles of four in the nursery when each day the teacher, Mrs Grimshaw, using just one large spoon, gave each child a spoonful of cod liver oil with malt. The children would sit with raised open mouths like little birds waiting to be fed.

After lunch all the nursery children had to lie down and sleep for half an hour and their were little mattresses and grey blankets (Janice’s had a tulip on it) for each child.

In the school playground

At school her best friend was Margaret Clavin, and her favourite teacher was Mrs Booth, who was very strict and would not allow chattering in class, but she was a lovely teacher.

Janice’s favourite lesson was English when many stories were read, much of it was called ‘comprehension’ in those days.

There was lots and lots of singing – including lots of hymns. Onward Christian soldiers, and There is a Green Hill were especially popular.

Boys and girls enjoyed dancing round the maypole in the playground.

In the playground the children enjoyed different games. These included Catch a girl where boys had to try and catch one of the girls as they ran around – but the girls could not be caught if they reached the railings. Hop Scotch, Pat a Cake and French Skipping were very popular too. Anyone know what French Skipping is? (Why not explain by posting a comment below!)

There was no school uniform in those days. Lunchtimes were in the school canteen where the large Norweb building on Hathersage Road now stands. A favourite meal was school pie – the smell of the baking used to flow to outside the kitchens.

Thank You to Mrs Hamadani for sharing these special memories,

and Thank You too to Miss Jenkins’ Year 1 of the school for helping with the questions.

St Chrysostom’s is an Anglican (Church of England) parish church in Manchester, UK. We’re an inclusive, diverse and welcoming faith community rejoicing in our Anglo Catholic tradition, where people of many differing backgrounds make friends. Find our Facebook group at https://www.facebook.com/groups/2364267899/
View all posts by stchrysostoms →
This entry was posted in Anglican, Christianity, Manchester and tagged Maypole, St Chrysostom's School. Bookmark the permalink.