People of Faith: Beyond the Binary

A challenging and inspiring exhibition Twilight People is currently at Media City, Salford. A group from St Chrysostom’s Church went to the opening event, from which Mycah wrote this report:

TWILIGHT PEOPLE is an art exhibit and oral history of people of faith who do not fit neatly into the category of ‘male’ or ‘female’.  This includes people who are transgender (authentic gender does not match the one assigned at birth) and agender (someone who does not identify as having a gender). 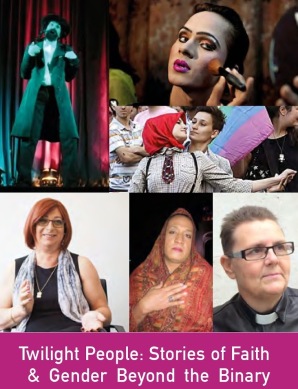 The main part of the exhibit that I explored was looking at the beautiful photographs of people who were representing who they felt their creator called them to be and how fluidly that fits in with their faith communities.  Shaan, who has helped to organize and run Twilight People, is a practicing Jew and identifies as non-binary transmasculine gender.  They were at the event last night, and I found it so powerful to be able to listen and hear the voice of someone who lives so strongly in their faith and in their identity.

What was incredibly striking about the evening was how thankful and engaged everyone was with the content of Twilight People, and the range of diversity represented in the evening.  Rev Rachel Mann, a transgender Anglican priest in the Diocese of Manchester, spoke last night as part of a group of Manchester LGBT+ people who are supporting the project.  She reminded us that God is not always found in the sunny brightness of a church on a Sunday morning, but in the twilight of our lives, as we move between the light and dark found in the everyday.

St Chrysostom’s is an Anglican (Church of England) parish church in Manchester, UK. We’re an inclusive, diverse and welcoming faith community rejoicing in our Anglo Catholic tradition, where people of many differing backgrounds make friends. Find our Facebook group at https://www.facebook.com/groups/2364267899/
View all posts by stchrysostoms →
This entry was posted in Anglican, Christian, Faith, Various Voices and tagged Binary, LGBT, Twilight. Bookmark the permalink.