Why do we venerate the Cross on Good Friday?

During the simple yet moving Liturgy on Good Friday we carry into church a large crucifix – a depiction of our crucified Lord.  The procession stops three times, and the priest sings or says “Behold the wood of the Cross on which hung the Saviour of the world…Come let us worship”, and when the cross reaches the steps near to the altar people are invited to make their own act of veneration.

This ceremony began in the fourth century after it was thought that the Church had recovered the remnants of the Cross on which Jesus died.  Around the same time in our Church’s history a theology of venerating or honouring depictions of saints or religious symbols, and this was summed up in the phrase “Honour paid to the icon passes to the prototype”.

When we pay reverence or honour to the crucifix we are paying honour not to a piece of wood but to the Crucified Lord himself. The act of reverence passes beyond the physical piece of wood to Christ. 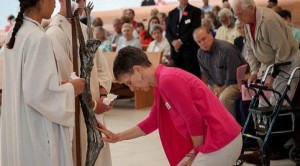 As people come forward to do this some kneel and kiss the feet of the Corpus (the figure of Christ), some simply bow their heads in prayer whist others touch the crucifix.

There is something special about this not being a mere “head” exercise – not just something thought about.  We physically move towards the cross, we physically venerate it, we touch the image of the crucified Lord and connect with his sacrifice and victory over death for ourselves. It is a ‘sacramental’ act.

In an earlier post we considered why we make the sign of the cross. The cross is at the heart of Christian faith. In whatever way we choose to venerate the Cross we are expressing many things – our sorrow for the sins we have committed resulting in our Lord’s death, our thanks for his sacrifice, our hope for a share in his victory about to be celebrated in a few days’ time all amongst them.

St Chrysostom’s is an Anglican (Church of England) parish church in Manchester, UK. We’re an inclusive, diverse and welcoming faith community rejoicing in our Anglo Catholic tradition, where people of many differing backgrounds make friends. Find our Facebook group at https://www.facebook.com/groups/2364267899/
View all posts by stchrysostoms →
This entry was posted in Anglican, Catholic, Christian and tagged Good Friday, Veneration. Bookmark the permalink.

1 Response to Venerating the Cross