We were very sad to learn of  the death of a much respected and much loved member of our congregation, Dr Noel Preston. Noel died peacefully at home on April 21st 2017, surrounded by the love and prayers of Valerie, his wife, and his children Andrew, Christine and Hilary. 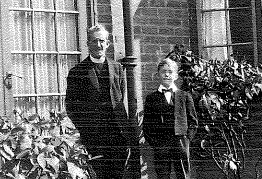 Noel with his father at the Rectory.

Noel was born in Salford on November 30th 1922. His father was an Anglican priest who became Rector of St Chrysostom’s in 1932. (Noel told us of his 1930’s childhood in an entry on the church blog, here) Noel went, on a scholarship, to William Hulme’s Grammar School and then to Manchester University Medical School. He didn’t feel a calling to general practice and from 1951 to his retirement he was a lecturer and then senior lecturer and researcher in bacteriology at Manchester University, as well as being a visiting lecturer / professor in several institutions over four continents. Although he retired in 1989 he continued giving lectures on a part time basis until 2009.

Noel and Valerie married at St Chrysostom’s in 1961 and set up home first of all in Chorlton and more recently in Heaton Mersey. They have three children and eight grandchildren.

Noel was a man of great personal faith and prayer. He was a faithful and regular communicant. He was attentive to sermons and often offered comments to preachers. He was a committed member of the Church’s Justice and Peace group – where he showed an active application of his christian beliefs to ethical and moral issues.

Noel was always a keen church organist and kept a detailed record of the voluntaries and hymns he played at church services between 1940 and 2016. He had a particular interest in hymns and their tunes, and wrote several entries on our church blog about them. (See, for example, Noel on O Jesus I have promised,  Praise to the Holiest and Love’s redeeming work is done.)

He knew the organ well at St Chrysostom’s – he was occasional organist at St C’s 1940-1952, then church organist 1952-61, and he quickly became assistant organist in 2007 when he and Valerie began attending at St Chrysostom’s. He last played for Mass on the Fourth Sunday of Advent 2016. Not surprisingly Noel has requested that the collection at his funeral be given to the church organ fund – to which he was a most generous contributor. 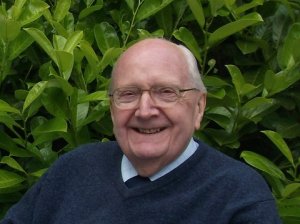 Noel at a church social gathering in 2010

At St Chrysostom’s we will always remember Noel’s cheerfulness, his solid commitment to the church, his encouragement to all church members, and his clear enjoyment of music and liturgy. Noel was an inspiration to us all at St Chrysostom’s. Nothing, except serious illness, would deter him from attending church every Sunday. Many will remember the concert we had at church to celebrate his 90th birthday, at which he gave tips for long life. (For an account click here)

We are grateful to God for Noel. We are thankful for Noel’s example, encouragement and for his support of our church. May he rest in peace and rise in glory.

Noel was received into St Chrysostom’s Church on Friday 5th May at 7.30pm, and the Requiem Mass (for which he had helpfully left guidance on music and hymns) was on Saturday 6th May at 11am. At the end of the Mass the committal took place at Church allowing all to remain at Church for refreshments.

St Chrysostom’s is an Anglican (Church of England) parish church in Manchester, UK. We’re an inclusive, diverse and welcoming faith community rejoicing in our Anglo Catholic tradition, where people of many differing backgrounds make friends. Find our Facebook group at https://www.facebook.com/groups/2364267899/
View all posts by stchrysostoms →
This entry was posted in Anglican, Faith and tagged Noel Preston. Bookmark the permalink.