St Chrysostom’s in the nineteenth century

We’re coming up to St Chrysostom’s Church’s birthday, so here’s some information about  the consecration itself 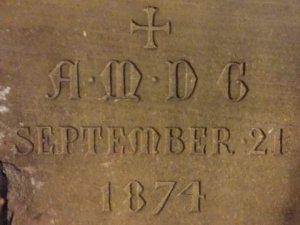 St Chrysostom’s Foundation Stone
Have you seen it?

By the 1870s Victoria Park and the local area had grown so much that it was decided it needed its own church. The site had been allocated in the original Victoria Park plans of 1836 but it wasn’t until 40 years later that building began upon it. On Friday 18th 1874 Sir William Reynell Anson laid the foundation stone in the presence of the Bishop of Manchester and other dignitaries. By 1875 a portion of the church had been completed and was used for worship and by 1877 the Church was ready for consecration.

At 11.30am on Saturday October 13th 1877 Bishop James Fraser consecrated the new building and preached a sermon on Christian Tolerance which was widely quoted at the time.

At the end of his sermon the Bishop told the congregation £990 was still needed to defray the total cost of the Church, which, inclusive of building, furnishings and site had amounted to £13,000. Two generous members of the congregation immediately met that shortfall.

The immediate area around the church at the time housed people of wealth, but the parish also served narrow terrace houses nearby – from its foundation it served a population new to Manchester, some wealthy, some poor, some seeking a new future. Many of the families came from countries other than England. From the beginning St Chrysostom’s welcomed a wide variety of people from differing backgrounds and cultures.

Today St Chrysostom’s continues to rejoice in variety and take prides in its welcome.

Long may it continue.