1837 plans for a Victoria Park Church

Posted on October 9, 2018 by stchrysostoms

The idea for having a church on the site of St Chrysostom’s came long before our church building. Dr Bosdin Leech, a noted local resident and historian of the area, wrote to the St Chrysostom’s Monthly Magazine in 1938 about this: 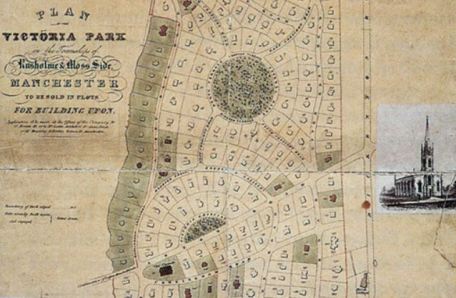 “My enquiries have given me information on a matter which may interest readers, namely on the attempt to build a church on the present site long before S. Chrysostom’s was actually built. In the opening ceremony of Victoria Park in 1837 it was stated that ground had been allocated for the purpose of building a church and, in the plan of Victoria Park of an almost contemporary date, a church is shown on the present site with outline shadowed as if it had already been built or at least commenced. Archdeacon Anson, at the laying of the foundation stone in 1874, said that more than thirty years before that time, when he came to the township, he saw that a commencement of a church had already been made and he had heard that it had failed, having been set up with a lack of principle that was contrary to the feelings of all true Christian fellowship and regard for worship. He added that it was in consequence of this failure that Birch Church was rebuilt (1845).

Mr J. S. Buckley, in his history of Birch-in-Rusholme (1911) says that the walls had risen a few feet above the ground when the shareholders fell out amongst themselves and the project, begun on radically false principles, deservedly fell through. He remembered, as a boy, playing among the foundations.”

We reproduce here part of the plan to which Dr Leech refers. To the right will be seen a design for a church planned for Victoria Park, by the architect Richard Lane, who was responsible for several of the early Victoria Park houses, and indeed he designed a house for himself there. This design, never fulfilled in Victoria park, is typical of churches of the early nineteenth century and can be seen, for example in St Mary’s Oldham (1830, designed by Lane), St Thomas, Pendleton (1831, designed by Goodwin and Lane) St George’s Hulme (1828, Goodwin, now residential accommodation), and in the no longer standing St Matthew’s, Castlefield (built 1825, demolished 1951).

It would be fascinating to know more about the ‘radically false principles’ of the original church project were, which led to it ‘deservedly’ falling through!

St Chrysostom’s is an Anglican (Church of England) parish church in Manchester, UK. We’re an inclusive, diverse and welcoming faith community rejoicing in our Anglo Catholic tradition, where people of many differing backgrounds make friends. Find our Facebook group at https://www.facebook.com/groups/2364267899/
View all posts by stchrysostoms →
This entry was posted in Anglican, Manchester, St Chrysostoms Church and tagged Richard Lane, Victoria Park. Bookmark the permalink.