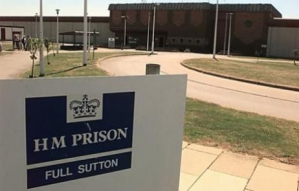 “Hello, Ian” a voice boomed across St Ann’s Square, in Manchester. I looked round and couldn’t work out who had called to me. Then a large bearded man in a well worn thick coat, selling copies of The Big Issue waved. I must have looked a little puzzled, so he called out, to the interest of passers by “Full Sutton Prison.” I went across to him and he reminded me we had met when I was Chaplain of the large Maximum Security prison at Full Sutton near York where he had been a prisoner.

When I worked there as Chaplain I worked hard to call everyone I met by their first name, from the long term prisoner, to the prison officers through to the Prison Governor. There I encouraged all to call me by my first name – again from the prisoner through to the Governor. I felt this was important for the Chaplain to do, so that it was seen all were treated the same by the Chaplaincy. It was not easy to do. It was a challenge to the institution where prisoners were called by their surnames, staff were called ‘Sir’ or ‘Miss’ by prisoners, and prison staff called the Governor ‘Sir’ or ‘Ma’am.’

When I came to St Chrysostom’s the tradition of the parish was to call the priest ‘Father.’ I have no objection to that, it’s part of the tradition in which I grew up. As in the prison setting, it means I am called the same thing by all. It also means that those who would find it uncomfortable to call me ‘Ian’ and would be in danger of not using a name at all, call me ‘Father Ian.’ And so little children in schools, in church or in the street call me ‘Father Ian’ as do their parents and other ‘grown ups.’ In its way the title is a reminder to me of my pastoral role, for everyone, equally. Similarly those who speak to me know what to say and can do so with ease.

In fact none of the clergy at St Chrysostom’s insist on a title being used – simple Christian names will suffice for those who prefer to use them to the clergy. However, it is important that we make every effort to make sure we treat our women priests as we do our male ones – either Christian names for both, or ‘Father’ or ‘Mother’ for both. It is a question of respect and equality.

St Chrysostom’s is an Anglican (Church of England) parish church in Manchester, UK. We’re an inclusive, diverse and welcoming faith community rejoicing in our Anglo Catholic tradition, where people of many differing backgrounds make friends. Find our Facebook group at https://www.facebook.com/groups/2364267899/
View all posts by stchrysostoms →
This entry was posted in Anglican, Anglo Catholic, St Chrysostoms Church and tagged Father, Mother. Bookmark the permalink.