The assistance of the Rosary 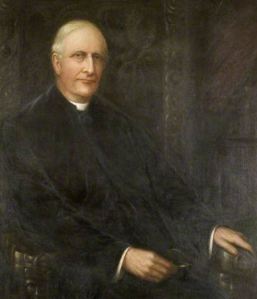 Sabine Baring Gould, from an oil painting by Charles Head

Sabine Baring-Gould, a remarkable, and very prolific priest of the nineteenth and early twentieth century, is perhaps best known as the author of the hymn Onward Christian Soldiers. He wrote at least 1,200 other works, including a lovely ‘period piece’ The Golden Gate – a book of prayers, which he published in 1873. In it he talks of the value of the rosary. He writes, of course, in the style of his time.

“The use of a rosary of beads is a valuable assistance. The Arabs use them to assist their prayers, and they have found of great help to devotion since their introduction into the Christian Church. A prejudice exists against them as distinctly Roman; but such they are not, as they are employed likewise in the Eastern Church.

It often happens that we feel a strong desire to pray, and that we soon exhaust our petitions without having satisfied our desire. In such cases the Rosary is of great value. The mind cannot always frame suitable expressions of its wants, and is not always sufficiently disposed to meditate.

The rosary then applies the need by affording brief subjects of meditation and prayers, the best possible, and of no great length. If it were tried we are confident that its use would be realized. The loss of the beads has been one most serious to the devotional character of the English poor, who, not having minds of sufficient activity to elaborately meditate, from want of some such help have given up meditation, and almost abandoned prayer. The Rosary is a great assistance in forming a habit of prayer.”

St Chrysostom’s is an Anglican (Church of England) parish church in Manchester, UK. We’re an inclusive, diverse and welcoming faith community rejoicing in our Anglo Catholic tradition, where people of many differing backgrounds make friends. Find our Facebook group at https://www.facebook.com/groups/2364267899/
View all posts by stchrysostoms →
This entry was posted in Anglican, Anglo Catholic, Catholic, Prayer, Spirituality and tagged Baring Gould, Rosary. Bookmark the permalink.