Andrew: Called in the workplace

Posted on November 30, 2018 by stchrysostoms 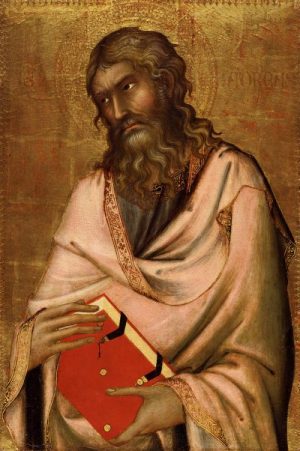 Andrew (feast day November 30th) was one of the first apostles Jesus recruited. He abandoned his net immediately when Jesus called him and his brother Simon Peter. Andrew was the apostle who told Jesus about the boy with the loaves and fish.

Andrew is said to have been martyred by crucifixion at Patras. The tradition holds that Andrew was crucified on an X-shaped cross, because he deemed himself unworthy to be crucified in the same form of cross as Jesus did. Scotland’s flag bears the same cross, now named after him—St. Andrew’s Cross.

Andrew was a fisherman, and St. Mark noted that Andrew with his brother Peter was casting a net into the sea when Jesus said to them “Follow me, and I will make you fishers of men”. So Jesus called Andrew, and Peter, in their workplace, he ‘caught’ them in the middle of their work. And what was their reaction? They immediately left their nets and followed him.

Our vocation can come to us at any moment in our lives. Sometimes it may come at an ‘inconvenient’ time to us. I certainly have had many occasions when I feel that God is calling me to do something while I was extremely busy studying or working. And now as I reflect upon the callings I had, they were always well timed, and proved to be crucial to my future.

Andrew pointed out that there was a boy with five loaves and two fish, he also said “but what are they among so many people”.

Sometimes we may be unaware of the gifts and talents of the people among us, especially children. How five thousand hungry men, plus eleven apostles, failed to notice that among them were a little boy with five loaves and two fish! Andrew questioned, rightly, “what are they among so many”, and Jesus proved to everyone that however small one’s gift can be, through the work of God, it can be more than enough than we can ever imagine.

On this feast of St. Andrew, think about our readiness to answer God’s calling, even if we are called in the middle of our daily work; and let us always be observant for the gifts and talents of the people among us, however small and seemingly trivial they may be, trusting that through God’s transformation, they may all be life-changing and pivotal to everyone of us.

St Chrysostom’s is an Anglican (Church of England) parish church in Manchester, UK. We’re an inclusive, diverse and welcoming faith community rejoicing in our Anglo Catholic tradition, where people of many differing backgrounds make friends. Find our Facebook group at https://www.facebook.com/groups/2364267899/
View all posts by stchrysostoms →
This entry was posted in Anglican, Anglo Catholic, Catholic, Saints and tagged Andrew. Bookmark the permalink.