Posted on February 18, 2019 by stchrysostoms 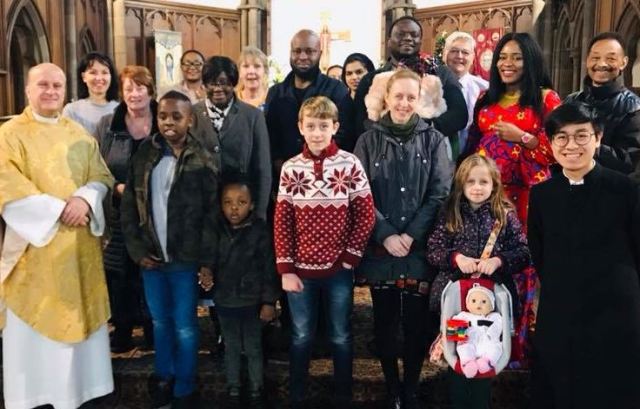 The Church press commenting recently on the retirement of a Bishop remarked how he had pioneered ‘Intergenerational Church’ in his diocese. Indeed, he had formed an intergenerational mission team.

Inevitably there were questions about what ‘Intergenerational Church’ in fact was. Was this yet another name or idea being put around in the church?

Quite possibly, but one suspects the Bishop who was encouraging ‘Intergenerational Church’ was addressing a significant problem. Many churches in his diocese may have had a particular generation over represented. Perhaps there was a variety but the different generations didn’t mix. Some churches find they have a high proportion of retired people and perhaps a few children, but the years in between are not well represented.

I was reflecting on this when I happened to come across a photograph from New Year’s Day at St Chrysostom’s. We had Mass at 12Noon, as we do each New Year’s Day. Numbers attending are not large, but several come to mark the New Year in this way. Those attending were a good representation of the congregation as a whole. The photograph, of many who attended, made me think about the generations represented at our church. I guessed the ages of those present and worked out what numbers were in each decade.

A fascinating result came about. Each decade, 0-10, 11-20, 21-30 etc had the same number of people in it, namely three. Then above the age of 50 I counted 6 people. How lovely to see the decades, the generations, evenly distributed.

Inclusion, an important word for a welcoming church, can mean many things, but surely we should rejoice when different ages, different generations, worship together and form Christian community.

St Chrysostom’s is an Anglican (Church of England) parish church in Manchester, UK. We’re an inclusive, diverse and welcoming faith community rejoicing in our Anglo Catholic tradition, where people of many differing backgrounds make friends. Find our Facebook group at https://www.facebook.com/groups/2364267899/
View all posts by stchrysostoms →
This entry was posted in Anglican, Anglo Catholic, Catholic and tagged Inclusive Church, Intergenerational. Bookmark the permalink.