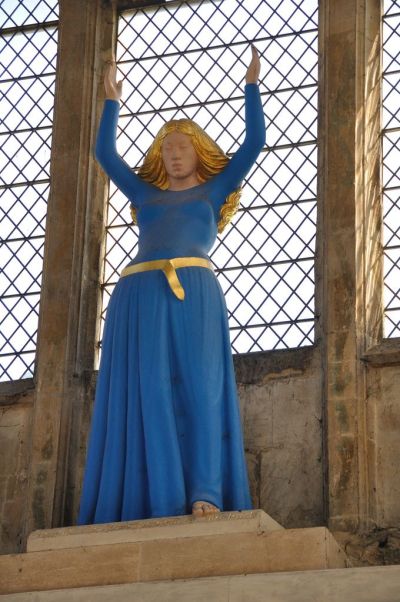 In November 2000 the Prince of Wales unveiled a striking statue of Mary high above the altar in the Lady Chapel of Ely Cathedral.

The sculpture, in Portland stone is the work of the renowned British sculptor David Wynne (1926 -2014) .

As well as being a comforting and inspiring this figure of Mary has not been without controversy.

Wynne’s sculpture has had its critics and its admirers. As the years unfold the admirers seem to be in the ascendancy.

English Cathedrals have traditionally been patrons and conservors of the arts, especially ecclesiastical art and music. A role of art is to enlarge the imagination, and inspire, and at times to challenge.

Look now at the photograph of the sculpture. What words would you choose to describe it. If Mary, as represented here, were speaking what words do you feel she would be saying?

From the twentieth century to the present day more Anglican churches and cathedrals are introducing statues of Mary, some as a single figure, some with Jesus, and from time to time in a Holy Family sculpture. In this month of May, as we look at aspects of Mary in the Anglican tradition, we discover an unfolding of different interpretations of her role through the centuries, and a more recent willingness to allow Mary’s example, and image, to guide and aid the Christian.

Here are two comments made about Wynne’s statue of Mary:

“For someone who has not grown up in a Catholic environment, the step towards a modern Mary is smaller to make than to one that looks like it comes from the Middle Ages or earlier. I have always found the classical Mary statues and images quite remote, dreary, over-chaste and unreal. I have never been able to understand how they can still generate devotion, either, although I am fascinated by a balance of male and female elements in the Church. I am looking for a small statue of Mary for in my living room, and if a small version of David Wynne’s creation existed, it might well be the one I am looking for.”

“This representation is the most wonderful one I have ever seen, it captures the young girl beautifully and has changed my view of Mary from a woman who was perhaps abused, really having little or no choice in the matter to a young woman joyfully embracing the task to which she has been called.
Magnificent!”

During May, on our church blog, we are posting a variety of blog posts about Mary in the Anglican tradition. We will look at different interpretations of Mary in word and image, as found in the Anglican church. Appropriately we begin with The Litany. A print version of these and other articles is being prepared and will be for sale at our special evening ‘Mary in the Anglican Tradition’ on Sunday June 16th at 5pm at St Chrysostom’s.

St Chrysostom’s is an Anglican (Church of England) parish church in Manchester, UK. We’re an inclusive, diverse and welcoming faith community rejoicing in our Anglo Catholic tradition, where people of many differing backgrounds make friends. Find our Facebook group at https://www.facebook.com/groups/2364267899/
View all posts by stchrysostoms →
This entry was posted in Anglican, Anglo Catholic, Art, Mary and tagged David Wynne. Bookmark the permalink.

1 Response to A young woman joyfully embracing the task