Posted on October 6, 2019 by stchrysostoms

Windows in the Anson Chapel given by Constance Pershouse Hind

Six of the beautiful stained glass windows in St Chrysostom’s Church were given by one woman benefactor. One set of three, showing Mary, Simeon and Gabriel are in the South Aisle, and the second set are in the Anson Chapel and depict the Baptism of the Lord, the Transfiguration and the Garden of Gethsemane.

Conny (2nd from left) and her siblings

Constance Littlewood was born in 1871 the third child of William and Jane (Jenny) Littlewood of Addison Terrace (now part of Daisy Bank Road). William was a noted Manchester architect and the family lived in Addison Terrace at the end of the nineteenth century and well into the twentieth century. They were regular worshippers at St Chrysostom’s Church.

On 2nd June 1902 Constance married George Harry Bradney Pershouse at St Chrysostom’s Church. He is described as a ‘gentleman’ of Stafford House, (no longer standing) in Daisy Bank Road – he was 27 years older than Constance. He died ten years later and Constance became a very wealthy widow.

Shortly after her husbands death she employed the well known Manchester auctioneers Artingstall and Hind to sell of some of George’s possessions including his noted library of thousands of books. In 1914 she married again, to Ralph Hind, one of the owners of the auctioneers’ business. The couple lived in Stafford House and also in a house in Southport where she died in 1943. 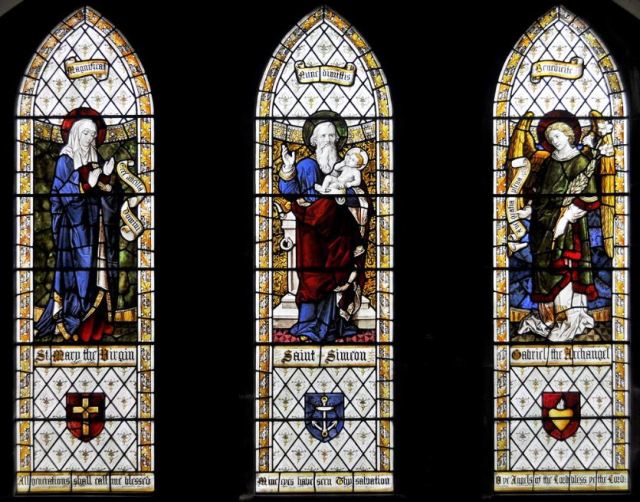 Windows in the South Aisle, the gift of Constance Pershouse Hind.

The beautiful stained glass windows of St Chrysostom’s Church are a noted feature of the Church. They enhance the beauty and worship of our church. Here, Andy Connelly a science teacher, with a particular interest in stained glass, writes:

“I often find peacefulness in a soaring stone church, a cool open place to sit and contemplate. The giant trunk-like pillars and the gentle play of the light cast through the stained glass create a shaded garden of stone and multicoloured light.

Stained glass windows are never static. In the course of the day they are animated by changing light, their patterns wandering across the floor, inviting your thoughts to wander with them. They were essential to the fabric of ancient churches, illuminating the building and the people within, both literally and spiritually. Images and scenes leaded together into windows shed light on the central drama of Christian salvation. They allowed the light of God into the church.”

This is the second in a series of blog posts about people connected with our church which we are posting in conjunction with a book we are publishing: St Chrysostom’s People telling of some of the people who, through the church’s 140 or so years, have had a part in making St Chrysostom’s what it is today. Here on our church blog we are adding a few more people to those of the book.

St Chrysostom’s is an Anglican (Church of England) parish church in Manchester, UK. We’re an inclusive, diverse and welcoming faith community rejoicing in our Anglo Catholic tradition, where people of many differing backgrounds make friends. Find our Facebook group at https://www.facebook.com/groups/2364267899/
View all posts by stchrysostoms →
This entry was posted in Chrysostoms People. Bookmark the permalink.