What the Bishop says …. about St Chrysostom’s People

Posted on November 4, 2019 by stchrysostoms 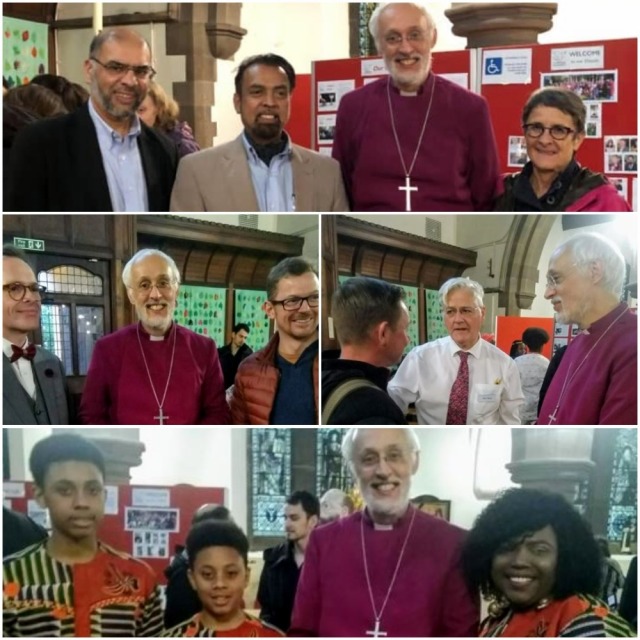 Bishop David talked with, and encouraged, members of the congregation, trafficked and homeless men, gay couples, those seeking asylum, local councillors, schools staff and many more…

Watching members of St Chrysostom’s Church play the parts of their predecessors at the recent anniversary service proved a deeply encouraging experience. Not least because this is a church prepared to define its history not via a series of photographs and biographies of vicars, however eminent they may have been, but by the lives and witness of members of the congregation and parish. And what a diverse group they turned out to be!

Today’s St Chrysostom’s is well-known in Manchester for how it welcomes diversity, and creates the context in which Christians from very different backgrounds can flourish in discipleship and ministry. It’s work supporting refugees and asylum seekers, and people who have been trafficked, as well as individuals marginalised on grounds of gender and sexuality, has gained it high respect across the city and beyond. But this is not a mere modern innovation. Ever since it first opened its door 142 years ago, this church has led the way in how it has included the marginalised, cared for the most needy, and sustained excellence in music and worship. The congregation members who, for an evening, briefly put on the guise of those who worked and worshipped here in previous generations, were not at all in unfamiliar clothing. Rather, they were demonstrating how they have taken up the mantle of their predecessors.

St Chrysostom’s parish has long been home to those who have sought solace and comfort for themselves and their loved ones in unfamiliar, and potentially hostile, surroundings. The wide range of civic and other leaders who joined us to celebrate this living heritage was itself a tribute to the impact that a group of open hearted Christians can have, both in its community and far beyond.

We are very grateful to Bishop David for these kind and encouraging words, and for the time and attention he gave to speak with so many at our celebration: ‘St Chrysostom’s People.’

We have produced a book giving the stories of over 50 different people connected in some way with the church. Copies, £4.50, are available from Church. (For more details, including a list of those included please click here).

St Chrysostom’s is an Anglican (Church of England) parish church in Manchester, UK. We’re an inclusive, diverse and welcoming faith community rejoicing in our Anglo Catholic tradition, where people of many differing backgrounds make friends. Find our Facebook group at https://www.facebook.com/groups/2364267899/
View all posts by stchrysostoms →
This entry was posted in Anglican, Chrysostoms People, St Chrysostoms Church, St Chrysostoms People. Bookmark the permalink.