Bishops in the House of Lords?

Posted on December 10, 2019 by stchrysostoms

Several political issues are being energetically debated in Britain. One which will not be receiving much attention is the question of Church of England bishops in the House of Lords. Of course that’s not very surprising, although it is rather controversial nowadays it isn’t a big issue.

The Liberal Democrats uphold the traditional Liberal position calling for the disestablishment of the Church of England and that would naturally bring about the removal of bishops from the House of Lords. The Labour Party favour an elected upper house and that too would result in bishops being removed.

Undoubtedly many bishops work hard in the House of Lords, and take their duties there seriously. Nevertheless the time to remove this historic anomaly is surely overdue. Twenty six bishops are guaranteed a seat in the House of Lords. This perpetuates a position of privilege and power so much out of place in a society and church of the twenty first century. With the exception of Iran no other country has religious leaders involved in making laws in its Parliament.

It is very difficult to understand why, in a modern democracy, Anglican bishops of  England should be appointed to the upper house of the Westminster Parliament – governing England, Scotland, Wales and Northern Ireland. No faith representatives beyond England are appointed to the House of Lords. No representatives of any other Christian denomination, or indeed any other faith are appointed. It cannot be argued that the English Bishops are there to represent the spread of Christian, or religious opinion, across the United Kingdom. Their position is inequitable.

The Church of Scotland, an established church, has never sought a role in the Westminster Parliament. The Crown, or Parliament, has no say in Church of Scotland appointments. Successive governments have made it clear that whilst Church of England bishops sit in the House of Lords the government, advising the Crown, must have the final say in their appointment. While the current agreed convention gives the church a significant voice in the choice of who becomes a bishop the prime minister’s office retains a significant part and indeed the final word. 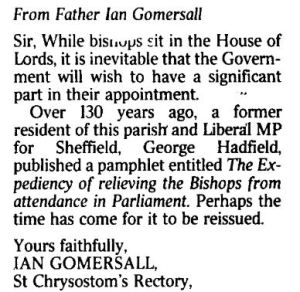 In the 1870s a leading Liberal MP, George Hadfield, lived opposite St Chrysostom’s. Hadfield was MP for Sheffield and a leading Presbyterian. Like many liberals  he felt strongly that it was inappropriate for Church of England bishops to be part of the government.

Archbishop Michael Ramsey said he felt the disestablishment of the church should be a slow and gradual process. Perhaps the next step is the removal of the anomaly of bishops sitting in the House of Lords.

St Chrysostom’s is an Anglican (Church of England) parish church in Manchester, UK. We’re an inclusive, diverse and welcoming faith community rejoicing in our Anglo Catholic tradition, where people of many differing backgrounds make friends. Find our Facebook group at https://www.facebook.com/groups/2364267899/
View all posts by stchrysostoms →
This entry was posted in Anglican and tagged Bishops, House of Lords. Bookmark the permalink.

1 Response to Bishops in the House of Lords?