Sacred Heart – the ‘Heart of God’

One of the greatest independent Christian thinkers in the twentieth century was undoubtedly the French Scientist and Priest, Pierre Teilhard de Chardin. His writings combine a deep life of prayer and spirituality with vision for the future and hope.

For Teilhard creation, and the process of evolution, were simply wonderful. He spoke of a God who loved and guided evolution. He described God in many ways including the ‘heart of matter, the heart of evolution.’ 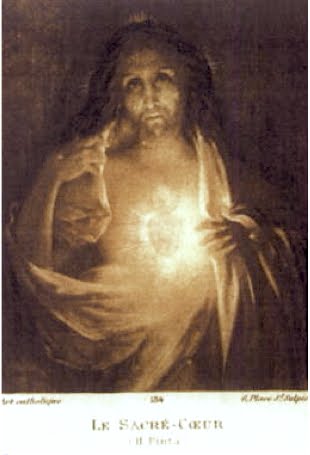 As a child Teilhard had been brought up in a devout French Catholic home. He recalled in later years his mother’s devotion to the Sacred Heart of Jesus.

The image had a profound effect upon him and on his desk he had a prayer card of an image of the Sacred Heart by Henro Pinta. He often carried the card in his breviary, to look at as he prayed.

The artist’s image differs from many representations of the Sacred Heart in that it is less anatomical. We see the heart represented more as a ‘golden glow.’

On the rear Teilhard noted his own personal prayer to the Sacred Heart, which captured his thought and understanding.

The prayer included these words:

the heart of evolution

the heart of matter

The heart of God…the golden glow, the world-zest.

The activant of Christianity…the essence of all energy.

Heart of the world’s heart

Focus of ultimate and universal energy

Centre of the cosmic sphere of cosmogenesis

Heart of Jesus, heart of evolution, unite me to yourself.

These are powerful words well worth reading over again and again. Teilhard sees Christ as there ‘in the beginning’ of the cosmos and as the heart of the growing of the Cosmos – all that is – towards and into God (the process he calls cosmogenesis).

Teilhard’s Christ, made human in Jesus, is the outpouring of God’s love, life and light throughout time and creation. For Teilhard the image of the Sacred Heart of Christ is an image of God, the centre of all, radiating and giving life to all that is.

A biographer of Teilhard comments: “what attracted him to the Sacred Hearth was its symbolic power and its superhuman appeal. The Sacred Heart . . . was for Teilhard a means of devotional escape from whatever was ‘too narrow, too precise, and too limited’ in the traditional image of Christ.”

Heart of Jesus, heart of evolution, unite me to yourself.

St Chrysostom’s is an Anglican (Church of England) parish church in Manchester, UK. We’re an inclusive, diverse and welcoming faith community rejoicing in our Anglo Catholic tradition, where people of many differing backgrounds make friends. Find our Facebook group at https://www.facebook.com/groups/2364267899/
View all posts by stchrysostoms →
This entry was posted in Anglican, Anglo Catholic, Catholic, Spirituality and tagged Chardin, Sacred Heart. Bookmark the permalink.