The Martyrs of Nowogrodek

Posted on September 4, 2020 by stchrysostoms

The Marytrs of Nowogrodek – Blessed Mary Stella and Her Ten Companions (commemorated on September 3rd) –   were nuns of the order of the Holy Family of Nazareth who arrived in Nowogrodek in September 1929. Nowogrodek is a small town in the modern Belarus. Its population was very diverse, including Jews, Muslims, Belarusians and Russians and others.

From the beginning, the nuns tried to discern the needs of the community. The nuns planned to run a school for girls and one of their first students was a Muslim girl. The nuns were not only examples of deep faith, hope and love for the locals, but at same time they were hard workers.

Their help and overall assistance to Nowogrodek’s community gradually gained them the respect of the locals. But in September 1939, as the Second World War began Soviet Russia occupied the area. The sisters were expelled from their house; forbidden to wear their habits. Thousands of innocent people were arrested and transported to the steppes of Kazakhstan and to Siberia. A few years later, the Russians withdrew and then came the German occupation.

The Germans started their terror by gathering dozens of local Jewish people in the market square and killing them, while their orchestra played a waltz. Daily, the Fara Church was filled with believers, but the executions continued nonetheless. In July 1942, a mass execution took place in the forest near Nowogrodek, 60 people, including two priests—Fr. Jozef Kuczynski and Fr. Michal Dalecki—were shot.

The citizens of Nowogrodek, tormented by the regime, looked for comfort in the church where Fr. Aleksander Zienkiewicz, the only priest left in the area, celebrated daily mass.

However, the Gestapo was still arresting and killing people. On the night of July 17 and 18th 1943, 120 people were arrested and to be executed. Sister Maria Stella was meeting with Fr. Zienkiewicz and said: “My God, if sacrifice of life is needed let them kill us and not those who have families. We are even praying for that.” 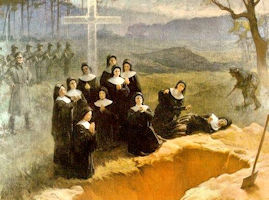 And suddenly, for an unknown reason, the execution of 120 people was stopped. Those who were supposed to be killed were transported to compulsory work in Germany. Some were even released. Those who were transported survived the war. However, on July 31, 1943, Sister Maria Stella and her nuns were ordered to report to the Gestapo headquarters at 7:30 p.m. After the rosary, 11 nuns went to the building.

The nuns did not hear any accusations, there was no investigation. On Sunday, Aug. 1, 1943, at dawn, the nuns were transported and executed in a birch-pine tree wooded area, not far from the town. Love was killed by hate.

In 1945, the Second World War ended. Fr. Zienkiewicz, Sister Malgorzata and all those 120 for whom 11 nuns had sacrificed their lives, survived the war.

The martys of Nowogredek call us to remember how great evil can enter communities. They encourage us to support one another irrespective of national boundaries, and to pray, in faith, as Christians. “No one has greater love than this—that one lays down one’s life for one’s friends,” said the late John Paul II on the day of nuns beatification in March 2000.

Pray: that Christians may courageously serve their local communities’ needs. Pray for the people of Belarus.

May the prayers of Blessed Mary Stella and Her Ten
Companions deliver you from present evil. May their
example of holy living and courageous death turn your
thoughts to the service of God and neighbour. Amen.

(From the Mass for the Martyrs)

St Chrysostom’s is an Anglican (Church of England) parish church in Manchester, UK. We’re an inclusive, diverse and welcoming faith community rejoicing in our Anglo Catholic tradition, where people of many differing backgrounds make friends. Find our Facebook group at https://www.facebook.com/groups/2364267899/
View all posts by stchrysostoms →
This entry was posted in Anglican, Catholic, Saints and tagged Marytrs of Nowogrodek. Bookmark the permalink.